Home
Uncategorized
How to deal with periodontal disease?

Gingivitis and periodontitis are less well known than cavities, but they can also be very damaging. Where do these periodontal diseases come from? From simple curettage to surgery, what are the options to deal with it? Everything you need to know to keep smiling for a long time.

It cannot be seen with the naked eye. But its solidity is essential to keep the teeth in place and allow them to perform their function well. The periodontium, as it is, represents all the tissues that support the tooth. “It includes the gums, the bone, the ligaments and the cementum, which is the thin layer that covers the root of the tooth,” says Professor Marjolaine Gosset, a periodontist at the Charles-Foix Hospital (APHP) in Ivry-sur-Seine. , scientific president of the French Society of Periodontics and Oral Implantology (SFPIO). The periodontium is to the teeth what the foundation is to a house: an essential element to prevent the “building” from collapsing. Periodontal disease is caused by bacteria in dental plaque. This induces chronic inflammation of the periodontium which, in some patients, will destroy itself, often slowly, over several decades. “These diseases often begin around the age of 30-40. They are very common, 50 to 60% of the population have periodontitis”, says Professor Gosset. It is the leading cause of tooth loss in adults. 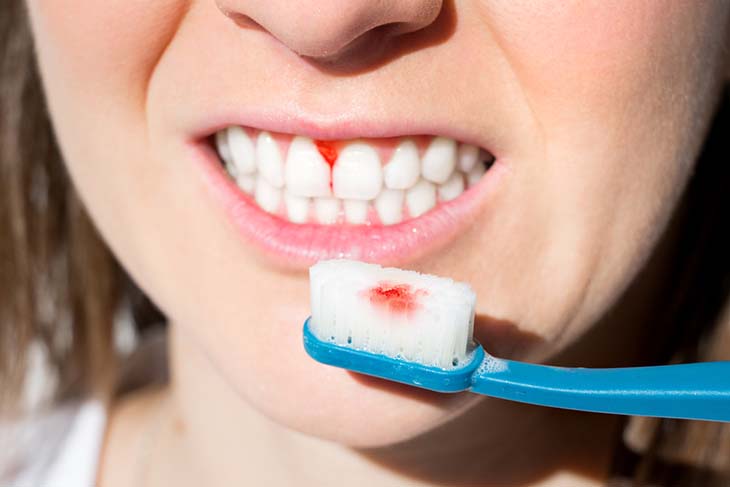 When the periodontium is affected, the patient usually does not feel anything. So no pain. The first sign you should put on the trail of periodontal disease is actually bleeding gums while brushing. Smokers rarely bleed from their gums. This does not mean that periodontal disease is not progressing, quite the opposite! If superficial inflammation is masked by tobacco use, it continues to spread deeper. Hence the need, even more so for them, to regularly consult a dental surgeon. The gums can become red and swollen. “The other classic symptom of periodontal disease is bad breath, a sign of a buildup of bacteria in the mouth. Finally, there is also the receding of the gums, which makes the teeth appear longer, this is another symptom of periodontal disease. This retraction can be a destruction caused by infection and inflammation, but more often it is due to overly aggressive brushing. It can produce an unsightly smile, and be accompanied by hypersensitivity to cold.

– Only 2.2 toothbrushes* are used per year and per inhabitant, on average, in France, far from the recommended 4.

-While 6 tubes of toothpaste* per person per year would be necessary for good oral hygiene, currently only 3.6 tubes are consumed in our country.

* Press release from the UFSBD (French Union for Oral Health) of March 2022.

From one stage to another

Gingivitis is an inflammation of the gums caused by the accumulation of dental plaque. The involvement remains superficial, the underlying tissues are intact. “It is reversible, because there is no deep destruction,” says Professor Gosset. Without treatment, it can degenerate into a more serious periodontitis. This means that bacterial plaque has spread and infiltrated between the tooth and the gum. The bacterium causes an inflammatory reaction, which over time can cause great damage. The volume of the gums and bones is insidiously reduced, the “foundation” of the tooth is attacked. “When the tissues have been destroyed, there is no stable support. The teeth can then move, change position and eventually fall out. However, this transition from one stage to another is not systematic. There is the innate, some will be more affected than others, even the young. This is the genetic terrain against which nothing can be done. On the contrary, it is possible to act on environmental factors, such as tobacco or unbalanced diabetes, which can also affect the periodontium. Stress, an unbalanced diet, pregnancy, and taking certain medications are other contributing factors. 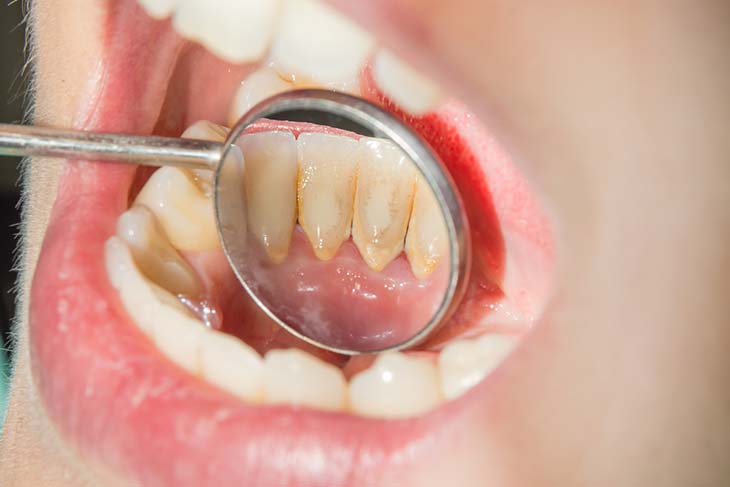 Tartar on the teeth – Source: spm

The patient, actor of his health

“Prevention is better than cure”, the abused expression finds its full meaning here. It all starts with impeccable oral hygiene. “Brushing should be done twice a day, in the morning and at night, for 2 to 3 minutes. Complete by cleaning between the teeth with dental floss or brushes. This thorough brushing should remove much of the culprit, dental plaque. “Prevention means first and foremost modifying risk factors. The patient must be fully involved in their care. Because, it’s a fact, lifestyle has a significant impact on periodontal disease. To keep them at bay, it is recommended to have a balanced diabetes, a varied diet and not to smoke. Because tobacco does not cause, but rather aggravates periodontal disease. The dental surgeon should be consulted at least once a year. You can do scaling if necessary, if the dental plaque has hardened into tartar. Most of the time, this gesture is carried out with a manual or ultrasonic instrument, followed by polishing the teeth, to complicate the work of bacteria, which adhere more easily to a rough surface than to a smooth one. Descaling is reimbursed by Social Security, one more reason not to miss this important appointment! “Removing tartar will reduce tissue inflammation. » Since periodontal diseases are often silent, regular consultation with a dental surgeon also makes it possible to detect early periodontitis as early as possible, treat it without delay and avoid reaching the stage of tooth loss.

Taking care of your smile is not just for taking pretty selfies! Because periodontal diseases can damage health, far beyond the oral environment. Its bacteria maintain an inflammatory state and can cause damage from a distance. Therefore, they can complicate the control of blood sugar levels in diabetics, increase the risk of cardiovascular diseases or promote premature births.

When peeling isn’t enough, the surface will allow you to clean away hidden bacterial deposits below the gum line. Most often, this surface is carried out with a curette or ultrasound, under local anesthesia. It can also be laser. “The effectiveness of lasers is similar to that of conventional tools,” says Professor Gosset. Whatever the method, it is a deep cleaning to eliminate a large number of pathogenic bacteria.

In addition, this care requires more time than a simple decalcification: count from one to four sessions. Then we wait about two months, the healing time, before doing an evaluation. If this is enough, we will maintain good oral hygiene and regular follow-up with the dentist to prevent recurrence. The pathology can be stabilized thanks to the daily adoption of the correct gestures, but it cannot be cured. If brushing is more sporadic or less thorough, there may be a relapse. “Occasionally, surgical access to the lesions, under local anesthesia, may be necessary to complete the cleaning. Next, we detach the gum from the bone with a scalpel, in order to clean the affected area. 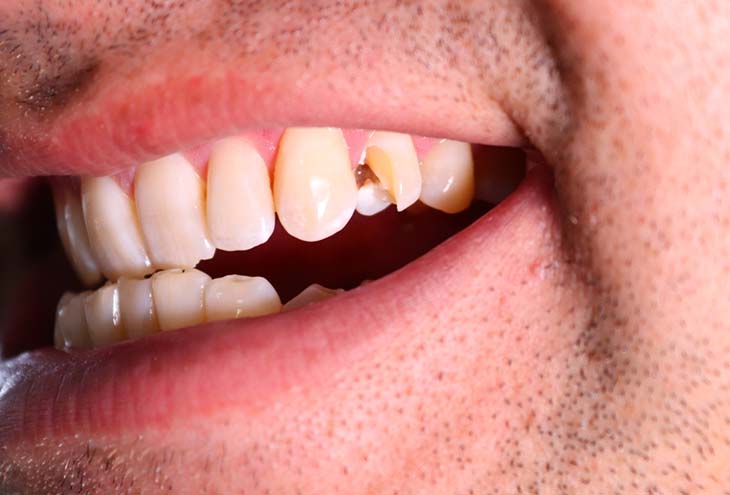 When teeth threaten to fall out

When periodontitis reaches an advanced stage, the teeth become increasingly unstable and can eventually fall out. To replace them, there are then several alternatives. The removable prosthesis, that is, the denture, which can be psychologically poorly accepted. The second solution is the bridge, its installation requires cutting the teeth on each side, to form a bridge on which the crown will replace the missing tooth. The third alternative is the implant, which does not harm neighboring teeth at all. It is a titanium screw that is placed in the bone, on which an artificial tooth, usually a crown, is placed. In the long term, this is the most comfortable, resistant and aesthetic solution. If periodontal disease has destroyed the bone, bone reconstruction may be necessary first. “Gum grafts can strengthen the gums, recreate harmony. Several techniques coexist, they give good results. » Most of the time, the graft will be taken from the palate. Replenishing the gum where it is missing protects the bare and sensitive parts of the roots of the teeth, and therefore reduces sensitivity to cold. It also gives a prettier smile. Only descaling is reimbursed by health insurance. All other gum treatments are not. Therefore, the doctor must give you an estimate indicating his fees. Some mutuals reimburse all or part of the care.

read also Bruxism: how to cure it?